Hey there! Awesome that you join me on this journey! If you love to explore beautiful places, like to eat foreign food or are looking for tips for any budget, we will have a lot of fun together. If you END_OF_DOCUMENT_TOKEN_TO_BE_REPLACED
SwissMiss on Tour is an explorer with a constant wanderlust and love for making new experiences, seeing beautiful places and eating good food. I have 25 years of experience in travelling and doing weekend activities (thanks to my parents who END_OF_DOCUMENT_TOKEN_TO_BE_REPLACED
Pictures follow

Traveling is also about embracing the unexpected and going with the flow. My plan for after Tulum was to first visit the natural reserve of Sian Ka’an  at Muyil. Find out how to get there and what to expect here. Afterward, I wanted to continue on to Bacalar. Little did I know in the morning that I would end up in the pretty costal town of Mahaual. 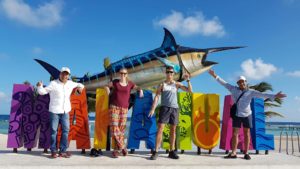 As I was about to leave the kitchen after breakfast in Tulum, Pol from France overheard me talking that I was going to Bacalar. He asked if he could come along. It’s always nicer to share a trip with someone. Since he was also down to make a stop at Muyil we were ready to go.

After the visit of the laguna and ruins in Muyil and having paid way too much for our collectivo to get there, I was getting more and more ready to try Pol’s idea of hitchhicking. He is an experienced hitchhicker. Since he was such a nice person I thought that I ciuld trust his instincts. Plus, it was bright daylight in the beginning of the afternoon.

Pol took out his sign and the erasable pen and wrote Bacalar on the sign. We positioned us right next to a dead snake along the road. That added even more to my nervosity. I never hitchhiked before. Was I crazy to do it in Mexico? Even Mexicans in Europe had warned me that it was a dangerous country. Then again, I had only met the nicest people in Mexico so far- Plus,  I wasn’t alone and it was the middle of the day. These were the thoughts that went through my head as I was holding up the sign. I was hoping for two female tourists to stop. However, the first car that stopped were two Mexican guys. Pol said that one of them spoke good English and that they were ok. They were going to Mahaual but could at least bring us closer to Bacalar. So, after an introduction we were sitting on the back seat of a nice car drivining along with a French guy and two Mexicans from Baja California. Soon I lost my last worries as they really were very nice. 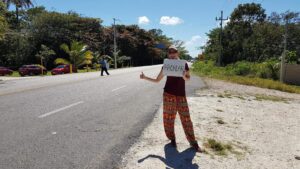 They were telling us about Mahaual and  how they ate one of the best grilled chickens in a road side restaurant on the road to Mahaual, where they wanted to stop again if it was ok with us because by then we had decided that we’d go to Mahaual with them as well. Of course it was fine with us and half an hour later we were eating freshly grilled (and killed) chicken and sipping coconut water out of a coconut. The chicken really was good and the funny thing was that the Mexicans were just as careful about possibly bad food as I was but they knew that it was alright here.

With full stomachs we continued to the small fishing village of Mahaual. I didn’t think I would return to the coast again before flying back and was very happy that it worked out for us this way. If you want a few beach days, Mahaual is a great place to stay. There only is one road along which all the hotels and hostels are located and either you are directly at the beach or one street away from it.

Relaxing at the beach

We had a cerveza on the beach with our new friends and then set a date for the next day to go to Bacalar together as they were interested in seeing more of that area as well.

Again we were lucky as it was carneval night. There was a small parade (like the night before in Tulum). They threw some candy at us as we waved at them.

The next morning, I talked to one of the workers who was cleaning the seaweed on the beach. He told me that this annoyance only started three years ago. He was really friendly as well and explained how life for the Mexicans is not easy right now. There is a big inflation on everything and prices change by the day. The businessmen realized that they could charge tourists anything. And the government is not thinking about the local people but just how to fill their pockets and so a lot of money goes to rich foreigners who are in charge. To underline that statement he said that I should come back in a few years and buy a place in Mahaual to give him a job. There always are two sides to tourism.

What to do in Mahaual

If you are tired of simply lying on the beach you can hop on a tourist boat and go snorkelling on the reef 10min from shore. You will see lots of fish and turtles.

One of the people in our dorm went kite surfing, so that’s also something you could do.

Tipps for breakfast in Mahaual

There is a small place selling all kinds of fruit and vegetable juices for 13 pesos for half a liter. One crossroad away from it there is a French bakery with very affordable things and the nutella croissant as well as the pain au chocolat are just delicious!!

Anyway, Mahaual is a nice spot to spend one or two days with direct beach access also for the lower budgets.

Do you have any stories of plans changing for the better due to people you met?