Hey there! Awesome that you join me on this journey! If you love to explore beautiful places, like to eat foreign food or are looking for tips for any budget, we will have a lot of fun together. If you END_OF_DOCUMENT_TOKEN_TO_BE_REPLACED
SwissMiss on Tour is an explorer with a constant wanderlust and love for making new experiences, seeing beautiful places and eating good food. I have 25 years of experience in travelling and doing weekend activities (thanks to my parents who END_OF_DOCUMENT_TOKEN_TO_BE_REPLACED
Pictures follow

I’ve been wanting to go to Belgium for a long time and finally, it worked out pretty well for me since I could have a two day stop-over before my flight to Cancun. It was so much cheaper to fly from Brussels to Mexico than directly from Switzerland that I was happy to combine these two countries. I intended to spend the full two days in Brussels but then a Belgian friend whom I had met in Australia told me that it would be a shame to only visit Brussels as you can visit it in a day and he finds Ghent much nicer than Brussels. Although I liked Brussels a lot Ghent really was more charming. Read on to find some more reasons why you should visit Ghent. 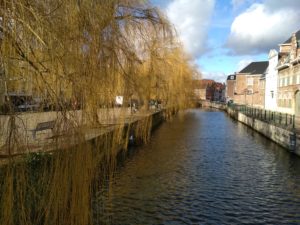 Reasons why you should visit Ghent

If a city has channels this automatically makes it more romantic. It’s nice to stroll across the bridges or in summer to drink a beer along the water.

Ghent is easy to visit on foot

Ghent is a small city and you have seen it in half a day if you stroll from the top to bottom with a few detours to hidden alleys to discover some murals or graffitis. 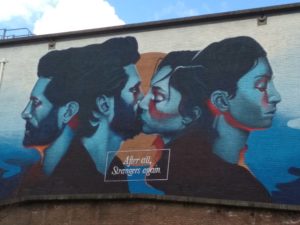 The best hot chocolate of Belgium is in Ghent

On my quest to find the best hot chocolate of Belgium I found my cup in Ghent. In a cute but modern café  next to the cathedral you can chose out of about five different hot chocolates with different flavors. I had the one with marshmallows and wish to be able to go back to it right now. At €3.50 the price is quite good as well. They also have nice cakes and pralines. If you drink something you will receive a praline for free as a bonus.

The cathedral
There are several big churches in Ghent but the cathedral really is huge! Be sure to go inside as it’s beautiful and has a nice ceiling with stars.

Architecture
There are some nice old European houses in Ghent but there also is the modern library close to the train station.

Graffitis and murals
Ghent (as well as Brussels) is basically an outdoor museum since it has many nice murals and an alley that is entirely covered in graffitis. A bit like the one in Melbourne. 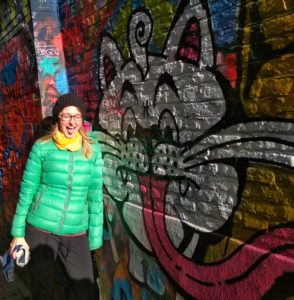 International food
In Ghent you find any kind of food you wish for from French or Morrocan cuisine to Asian and of course Italian. 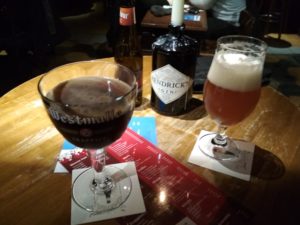 There is a pub (Dulle Griet) that claims to have more than 500 different beers. It has a cool decoration and really you can have any taste or color of beer that you wish. If you drink one of the long 1 liter glasses you have to leave your shoe so that they can make sure that you won’t steal the glass. They will put your shoe into a basket that hangs from the ceiling. When you return the glass you will receive back your shoe. They used to do that with passports but apparently too many people forgot them and so they started the thing with the shoe. I bet you won’t forget that.

Gravensteen Castle
Amidst normal houses you find the castle of Ghent which is open to the public for 10€ (6 Euros up to 25 years).

The golden city
If you spend the night in Ghent you are lucky enough to see the city when the houses are lit up and now appear golden which all reflects on the channels. It’s very much worth it to take a stroll through Ghent at night.

What was your favorite city in Belgium and what are your tips?