Hey there! Awesome that you join me on this journey! If you love to explore beautiful places, like to eat foreign food or are looking for tips for any budget, we will have a lot of fun together. If you END_OF_DOCUMENT_TOKEN_TO_BE_REPLACED
SwissMiss on Tour is an explorer with a constant wanderlust and love for making new experiences, seeing beautiful places and eating good food. I have 25 years of experience in travelling and doing weekend activities (thanks to my parents who END_OF_DOCUMENT_TOKEN_TO_BE_REPLACED
Pictures follow

Once more the Lao drivers just did whatever they wanted when I traveled from Vang Vieng to Vientiane. 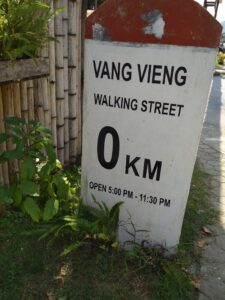 I booked my ticket for 50k kip on the 9 a.m. mini van. I would have liked to go earlier but the erarlier buses wouldn’t drive into the city center. Instead, they’d drop you off at the bus station outside town.
However, at 9.30 a.m. still no pick up showed up. I asked at the reception of my hostel if they could check. Instead of calling, he told me to walk to the office as it was close by, as they sometimes “forgot” people. 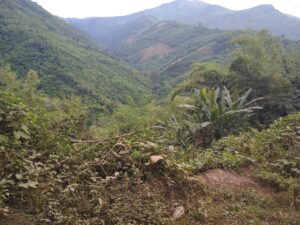 So, I walked to the office and was dreanched in sweat already as it was another hot day. Good news, the pick up would come in 10 minutes. The golf cart buggy, filled with Asians then showed up and I took the last seat. However, instead of the minivan they drove us to a big bus.

Ugh, either they had really forgotten me or there just wasn’t a 9 a.m. mini van that day since there weren’t enough people to their taste. I got one of the last empty seats before another group of girls came on the bus who clearly didn’t fit. They were ushered out again and I don’t know what happened to them afterward.

The drive from Vang Vieng to Vientiane

Finally, at 10.06, we started rolling. The bumpiness actually wasn’t that bad. The road was much better here than between Vang Vieng and Luang Prabang. There still were some gravel stretches but hardly any curves. Yet, probably we would have been quicker with a van.

There was a toilet (squat) / food stop at around noon and all the other buses and vans seemed to stop there as well. 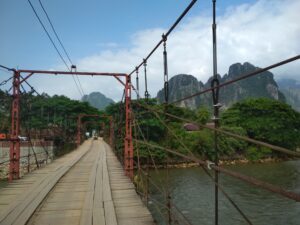 We arrived in the capital of Laos, Vientiane, at shortly past two and so at least the time frame of four hours had been correct. Still, from my other travel experiences in SEA, public transport was quite reliable. However, in Laos, you could be glad if you were transported the same day you booked the ticket…Another reason why flying might be more stress free.

What was the most annoying  or astonishing driving experience you had in another country? Comment below.

Read more about Laos in my I love Laos travel guide which you can buy on Amazon in English and in German.