Hey there! Awesome that you join me on this journey! If you love to explore beautiful places, like to eat foreign food or are looking for tips for any budget, we will have a lot of fun together. If you END_OF_DOCUMENT_TOKEN_TO_BE_REPLACED
SwissMiss on Tour is an explorer with a constant wanderlust and love for making new experiences, seeing beautiful places and eating good food. I have 25 years of experience in travelling and doing weekend activities (thanks to my parents who END_OF_DOCUMENT_TOKEN_TO_BE_REPLACED
Pictures follow

There are several easy options to travel from Vientiane (Laos) to Thailand. You can book buses to Bangkok, Pattaya, and Chiang Mai. However, there was no option from Vientiane to Sukothai.

After a lot of research, I found possible routes on the Internet. There are several ways. In the end, I just went which whatever option worked out the best. 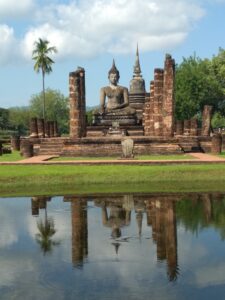 The easiest would be, if you catch a direct bus from the central bus station in Vientiane to Udon Thani in Thailand. That’s the cheapest option at 22k kip and takes 2.5 hours.

The public buses leave about every 1.5 hours with the last one at 6 p.m.
However, since I hoped to catch the night bus and the 4.30 p.m. bus from Vientiane was full, I took the green number 14 bus (toward buddha park) for 8k kip. It dropped me off right in front of the border custom office.

If you want to travel by tourist bus it will cost you 60k kip just to the border town of Nong Khai.

I bought a one way ticket across the bridge for 11k kip and then exchanged my remaining kip into Thai Bht. The exchange rate was quite okay.
I had no troubles getting out of Laos but as soon as I passed the gate where I put my one-way ticket, they wanted to sell me a new ticket for the bus for 4k kip. I didn’t know what that was about but since the crammed bus was about to leave, I hopped on and stood in the open door while the bus was driving across the bridge for the next few minutes.
To get into Thailand, I had to fill in the arrival card and then was stamped into Thailand again.

After the border, some tuktuk drivers wanted to offer me an expensive ride to a bus station. However, I luckily then spotted a van which also was about to leave. It was going to Udon Thani and cost 50 Bht. One hour later, we reached bus station number one in Udon Thani. 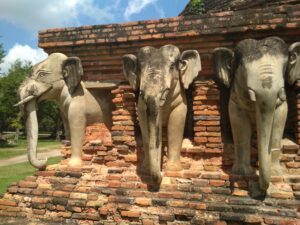 Bus from Udon Thani to Sukothai

From what I understood, there was a night bus to Sukothai, however, it was full tonight since it was a holiday and lots of Thais were traveling.
So, I’d spend a night in Udon Thani and journey on the next  day. The first bus at bus station number one would be at 10.45 a.m. for 311 Bht. However, there also is bus station number two, with more times. The guy at the counter couldn’t tell me at what time but probably 6 a.m.

So, first, I enjoyed a dinner and the a/c in the nearby Central Plaza Mall. How nice it was to be inside a real mall with all the western stores and coffee shops while in Laos, I hadn’t even seen a normal supermarket except in Vientiane. Not that I want to eat Western food in Thailand but it was nice to have the option.

The next morning, I made it to bus station number 2 (5 km from bus station number one for about 100 Bht per taxi or tuktuk) and got there at 6.30. Good that I wasn’t there earlier as the counter only just opened up. The first bus of the day was at 7.30 a.m to Phitsanulok (the Thais pronounce it Pitluk) where I’d have to change the bus.

The ticket cost 266 Bht and while waiting for the bus to leave, I enjoyed an iced Thai milk tea.
How wonderful it was that the bus left on time and we even received a water bottle and a few cookies.
Unfortunately, the ride was rather slow and we reached Phitsanulok at 3.30 instead of 2.30. I’d have had a direct mini van connection but I chose to go eat something first and left one hour later. It’s 50 Bht to New Sukothai and 70 Bht to Old Sukothai. 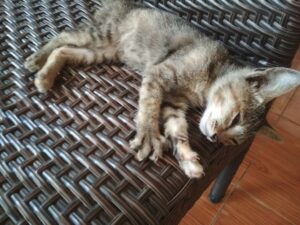 Sukothai temple and sculpture park really is worth a visit and I am glad I made the journey there.

Read more about Thailand in my I love Thailand travel guide which you can buy on Amazon in English and in German. There also is an I love Laos travel guide.